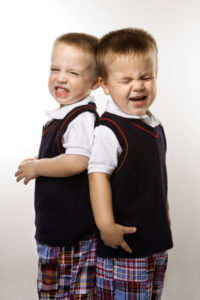 By the age of two, a child cannot avoid his twin. For some children the “Terrible Twos” is an especially difficult stage, where he has lots of needs and all of them urgent. For twins, it is more difficult as each child competes for his need to be addressed first. No two year old likes to share his parent and the child has not mastered the skill of taking turns. From an earlier age, twins have to learn to wait, share and take turns. Some children don’t like this and go to extreme lengths to get the attention they want.

Biting occurs more commonly with twins than with single children. There are few better ways of getting an adult’s attention than sinking your molars into exposed flesh that belongs to someone else! Unfortunately there is little an adult can do on the persuasion front to stop children biting, but steps need to be taken to stop it.

Quiet, firm handling of the situation is required. There is no point in getting hysterical, yourself, if your child is the biter. From a child’s perspective, there is nothing more fun than having adults running around agitated as a result of your (the child’s) biting. However, if you (the child) miss out on a treat, are removed from company because of biting someone and the adults don’t react, there isn’t much point in continuing to bite.

The less that biting results in special attention for the biter, the less likely the child is to bite. This message may take time to sink in, so be consistent in your response to this behaviour.

Temper tantrums are one of the most difficult for any parent to deal with. Multiply it by two or three, and life for the whole family can be a nightmare. In most cases, a child has a tantrum because she is frustrated at not being understood – most two to three year olds are not fluent speakers – or being prevented from doing something that the child feels she should be allowed to do. A tantrum may start for no apparent reason and anything you do is to no avail.

This difficult time does pass, as it is a normal part of a child’s development. If the parent can identify what triggers a tantrum in a child, distraction may be one way of preventing a full-blown tantrum. Once the tantrum has started parents can opt to use a number of different tactics: removal from the scene (as with the biting); ignoring the child until her behaviour is more appropriate; firm holding (beware of kicked shins and head butted noses); “time-out” in another room. One mother used a large beanbag to put her irate son into, lying him on his back on the flattened-out bag. He could trash about quite safely without risk of injury to himself or others, and couldn’t get off by himself. Once he had calmed down, he was helped from the beanbag.

A word of warning: do not give hugs and kisses following the end of the tantrum. Wait until the child does something that warrants reward. In this way, you will teach the child that good behaviour gets attention, bad behaviour doesn’t.

Disciplining twins can be unexpectedly problematic. Four-year-old identical boys seem to be the hardest of all. Even experienced parents can be surprised at how ineffective their usual forms of control appear to be. Why should this be? Twins are more likely to want to impress their twin and hence, take very little notice of what the parent or primary carer says. Because of this, a parent needs to exert more disciplinary pressure than would be the norm.

With children of different ages, one will normally be old enough and possibly more sensible to see potential dangers or be young enough not to be able to take part in the prank. Twins however egg each other on and their persistence is legendary. Triplets and quads pose an even bigger challenge.

As the children know each other so well, it is possible for them to communicate non-verbally. They use this ability to exclude parents and other members of the family to devastating effect and discipline is harder to exert. Nurturing strong relationships between parents and individual twins helps make disciplining each child easier. Parents should endeavour to spend time alone with each child, and this is where the extended family can be a great help.

Be careful that the child who has misbehaved is the one who is punished, not both of them. When neither child will own up to the offence, this can be difficult. Make sure that the punishment is suitable to the offender, i.e. that John will mind that he doesn’t get a comic to read. If John doesn’t like reading, then it isn’t much of a punishment. Do not leave it until the end of the day to metre out the discipline. The child may well have forgotten about what happened earlier in the day and will be confused by events. Discipline and reprimands must be given at or near the time of occurrence or the message will be lost.

The above sounds rather negative but discipline should reward the good, not punish the bad, behaviour. Reprimands will need to be given in the extreme cases. This should be done individually and in private. When the children are about three, star charts can be a pleasant way of encouraging good behaviour. A star is given on completion of a task, i.e. picking up all the crayons on the floor; no star if the job is not done. No fussing or nagging will be needed. On achieving seven stars, a prize is given; something small, like a colouring book or similar. At the end of 28 stars (this should take about a month), a large prize is received. This can be something which the child really wants, but there has been no reason for getting it.

Many parents feel that twins should be kept together always. There are some five-year olds who have never been out of each other’s sight for more than a few minutes. For these children, the inevitable parting at some later date is bound to be a painful and traumatic experience. If they have not been separated for any length of time, they will not have the confidence that, following a separation, they will be together again soon. For twins that are separated, time spent alone with their parent becomes a real treat. The child will revel in the rare opportunity to have undivided attention and the parent may well find that they have an unrecognisably delightful and amenable child.

Pat, a teacher, was near despair. She had always had an excellent relationship with her seven-year old son, but the four-year old twins, Peter and David were quite different. It felt as if they were deliberately scheming to make life as difficult as possible for the family. They were inseparable, yet their every activity ended in vehement arguments and a fight. The noise levels were horrific. They were always getting into terrifying scrapes and took absolutely no notice of parental warnings. Exhausted at the end of the day, Pat would look back and wonder if she had said a single positive word to the boys. Her vocabulary was almost entirely limited to “Stop that!”, “Don’t do that!”, and “If you ever do that again….”

These identical boys had always been together – indeed they had never spent more than a few minutes apart. Only their mother and elder brother could tell them apart. Their father still had great difficulty. They were dressed alike, which added to the confusion. Inevitably they were known as “the twins” and were called by their own names rarely.

The boys talked at great speed, but often their speech was incomprehensible to anyone but their twin. They had their own twin language. They had some normal language, but it was immature and hard to understand because of their poor articulation.

A plan was made to help the boys to think of themselves more as individuals and for their parents to get to know each child separately. To start with, they were dressed differently so, for that day at least, everyone knew who was who. They were called by their own names at all times and at playschool they had name badges so the staff knew which child was which.

Gradual separation was an important part of the plan. First Pat would take one shopping, while the other helped his father in the garden. Later, friends would ask one out to their houses while the other had a treat at home. Then, they started going to playschool on different mornings, with one joint morning so Pat could have some time to herself. Pat was amazed by the children she discovered. When they were alone with her, each was a delight, well behaved and fun. Discipline was not a problem and obviously they enjoyed the new relationship with their mother. Their speech improved as they had more time alone with an adult. After a time, their behaviour when together also improved. They still had their arguments, but they were much more responsive to their parents.

Rachel and Sarah, a pair of bright identical twins, became known as the “whispering twins”. It had all started when they were about two-and-a half. When strangers appeared, they would only talk in whispers. This got attention from both parents and friends, as the adults tried to persuade the girls to speak up. Initially, they would give in after a few minutes. Later, the children became increasingly skilful and persistent, obviously regarding it as a challenge. By the time they were four-and-a half, they could hold out all day against all incentives, including treats and much wanted presents. They would sometimes announce their intention to stay silent all day.

Time apart was the only answer. Naturally, the girls resisted this strongly at first, but gradually they began to see there were advantages in having individual attention.

Mary was desperate. Each of her four children, aged 5, 3 and two-year-old twins felt that he or she alone deserved their mother’s attention. Each was a pleasure on the rare occasions that she only had one child with her. The main problem was Daniel and his biting. He would bite anyone he was with, but particularly his twin, Jonathan. He had bitten with such ferocity that, on occasion, he had drew blood. Mary took to carrying him around, for the other children’s safety. This, of course, gave him exactly the attention he was seeking and reinforced his biting behaviour.

Not surprisingly, Jonathan began to resent his lack of attention and started biting too. Determined action on Mary’s part was called for. Each time one started biting, he was removed, quietly but firmly, from all the activity and held in a dull corner until he was quiet. Then, he was allowed rejoin the group. This was repeated immediately each time biting occurred until the biting stopped. Meanwhile extra attention was given to the bitten child. This strategy reduced the number of bites given, but it was some months before Daniel stopped biting altogether. Mary’s persistence and consistency won the day – eventually!

As a final note both temper tantrums and biting will pass with time. Obviously discipline goes on longer but definitely gets easier as the children grow older. Without a doubt it is hard and you will have days when the shouting never stops but there will also be great days when they have a mate to play football with and someone who will listen to their play station successes and actually understand! Don’t get disheartened and feel that your children are the worst in the world – it is hard to compete at any age and when you are two and just want your Mammy to yourself and can’t have her things must seem very unfair!